We are born with a finite ability to sense the world we live in. Our ears, eyes, nose, tongue, and skin all have a limited range of operation. To further our understanding of the universe, mankind has invented instruments to expand the sensory range. Starting with the telescope and the microscope in the 17th century, instruments have advanced our scientific insights and technological development. In that same century, the magic lantern pioneered an early form of mass entertainment and mass education, allowing for easier knowledge dispersion. With the invention of the proto-cinematographic instruments in the late 19th century, time could be stopped or sped up at will, giving us insight into the nature of motion.

Microcinematography, the synthesis of microscopy and moving image, is a combination of two sensory expansion tools and allows for the exploration of different scales of both size and time. Gut Feeling investigates the boundaries of current microcinematography by using an advanced optical microscope and by employing building blocks of the promising field of synthetic biology as the content of an audiovisual experience. 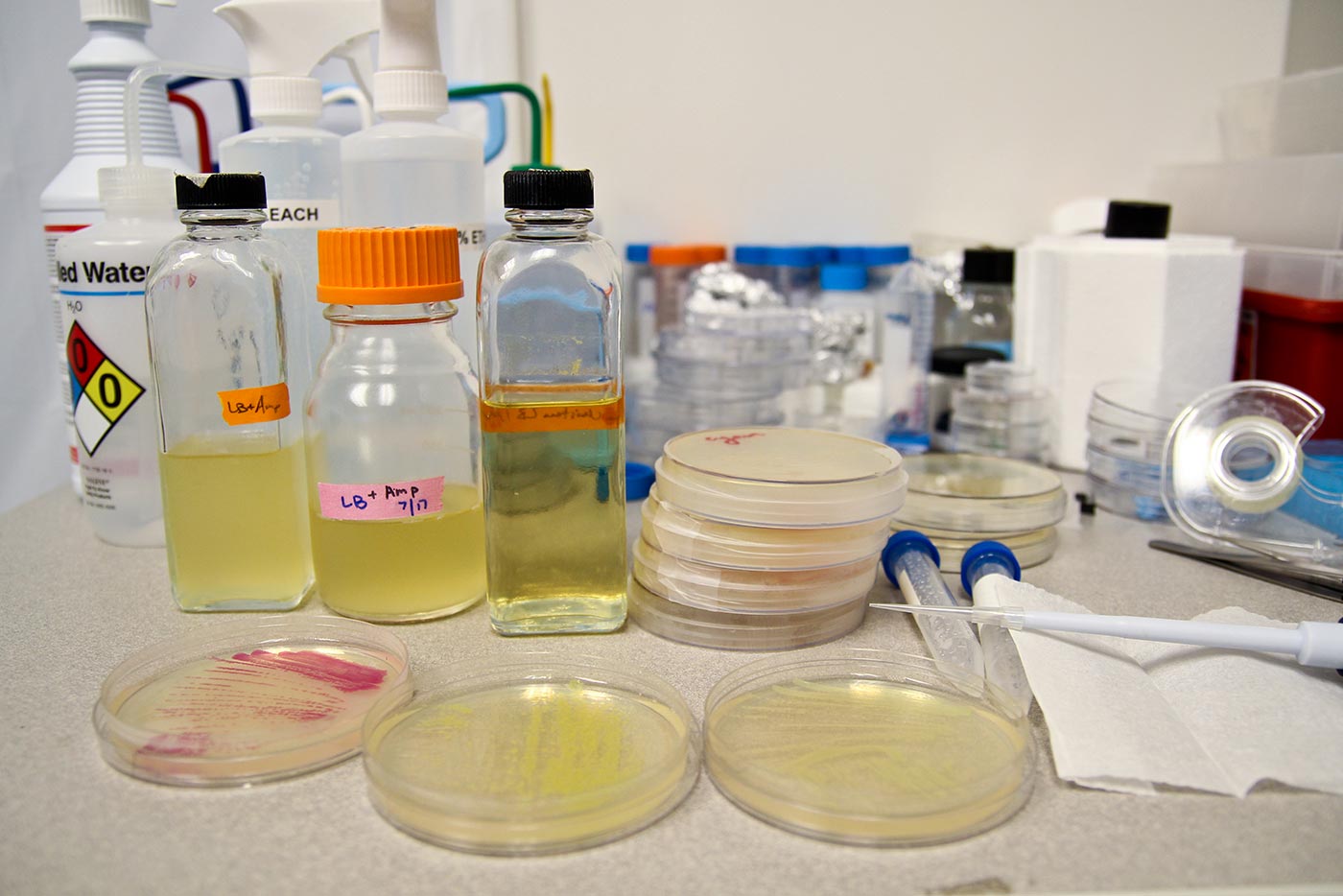 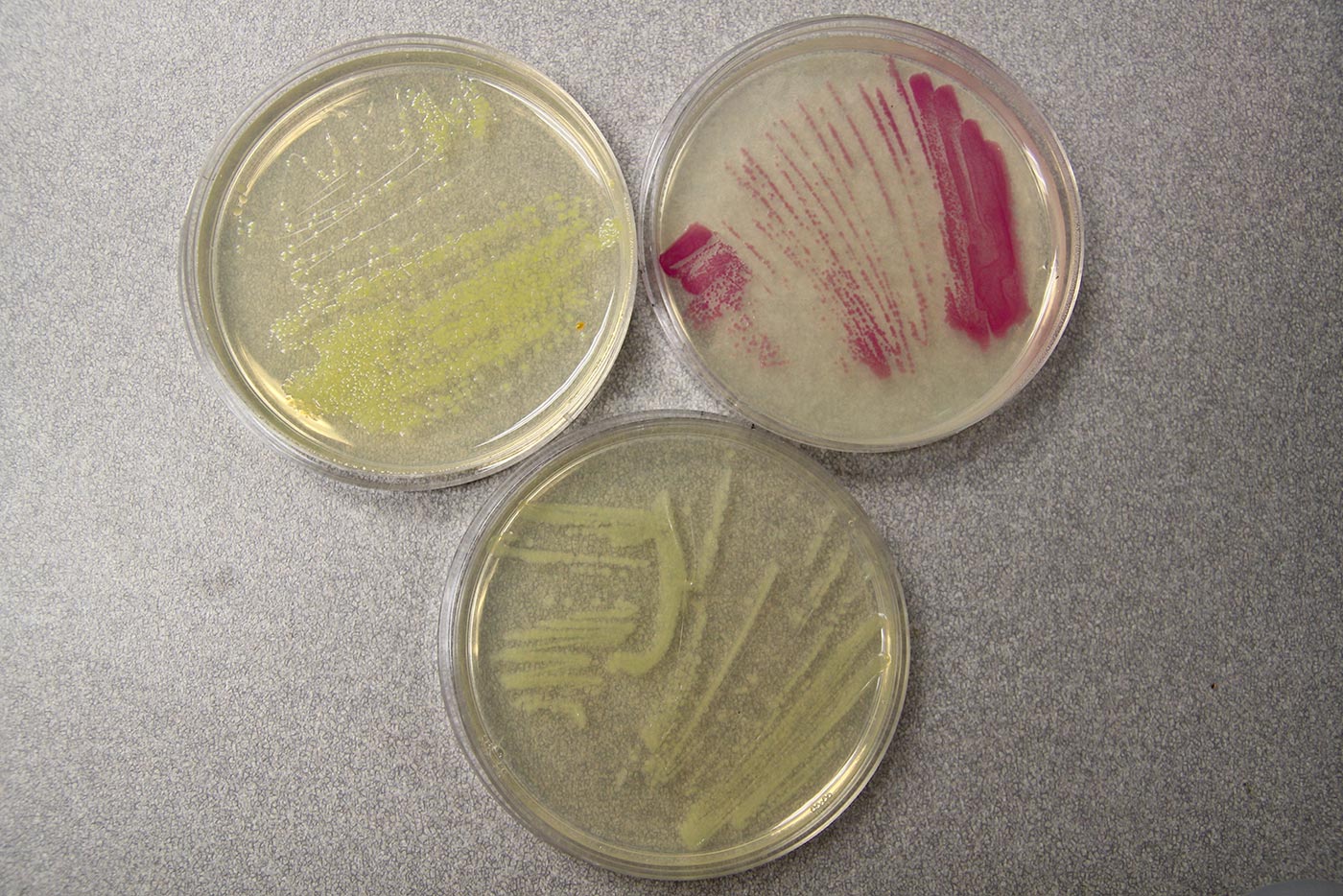 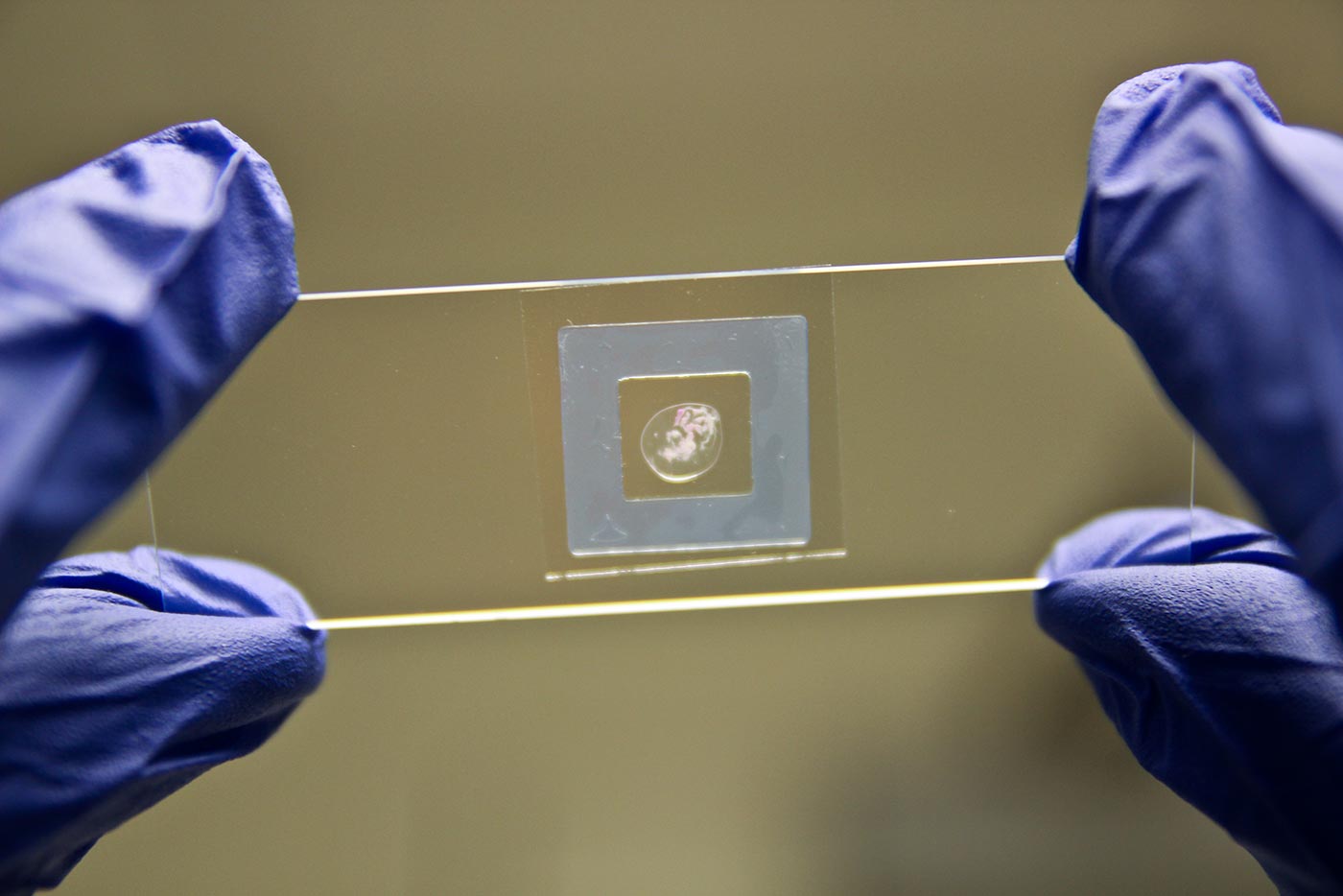 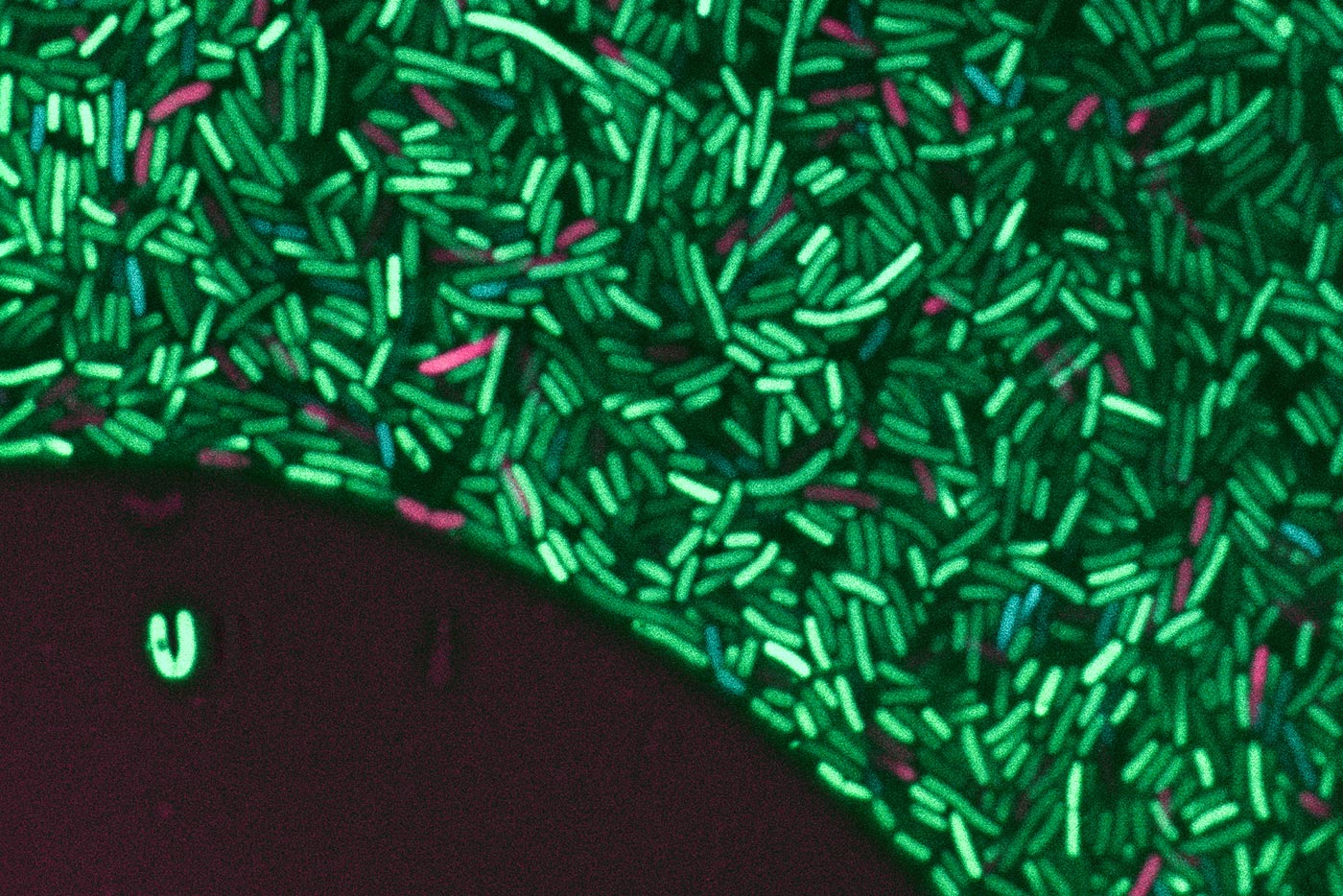 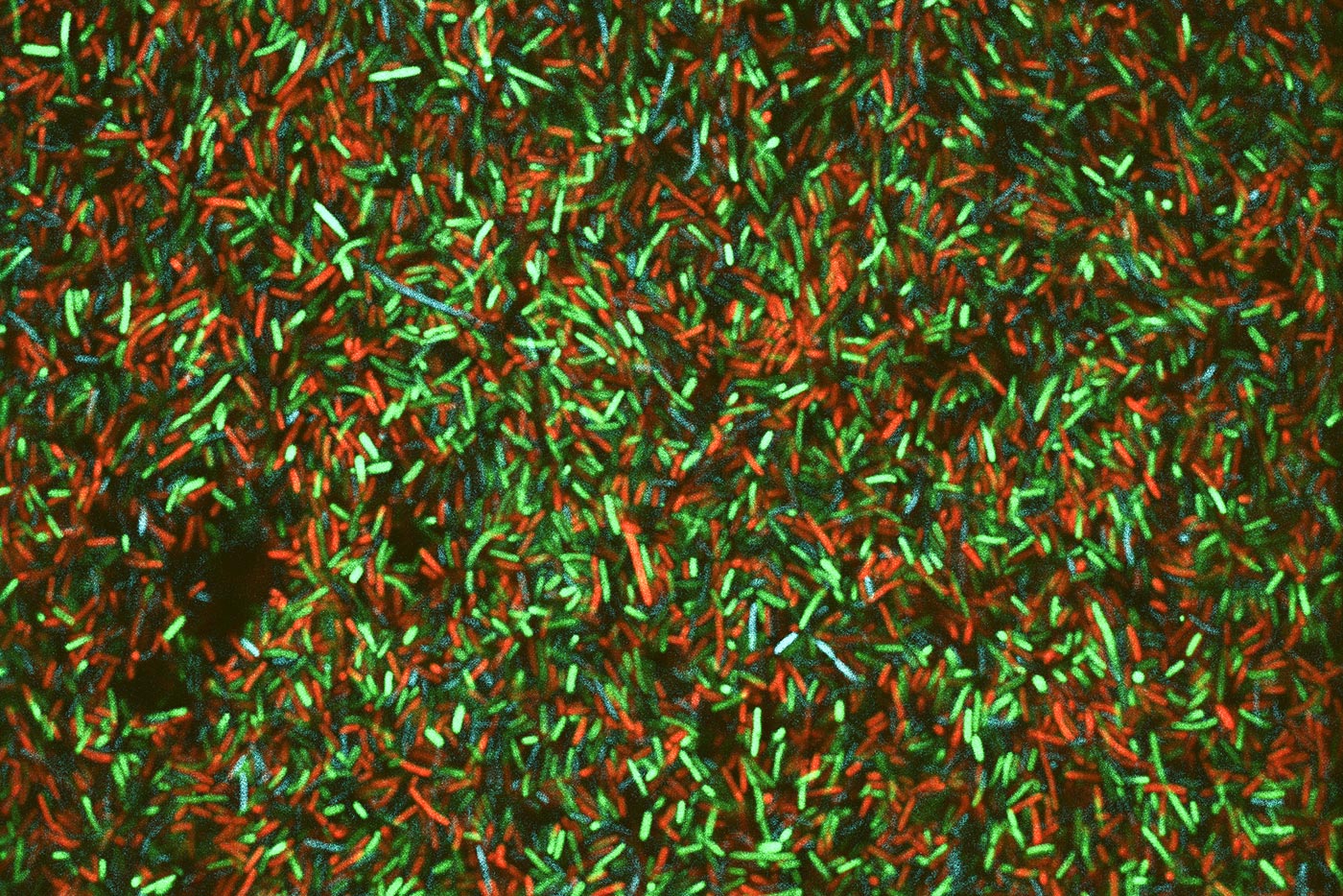 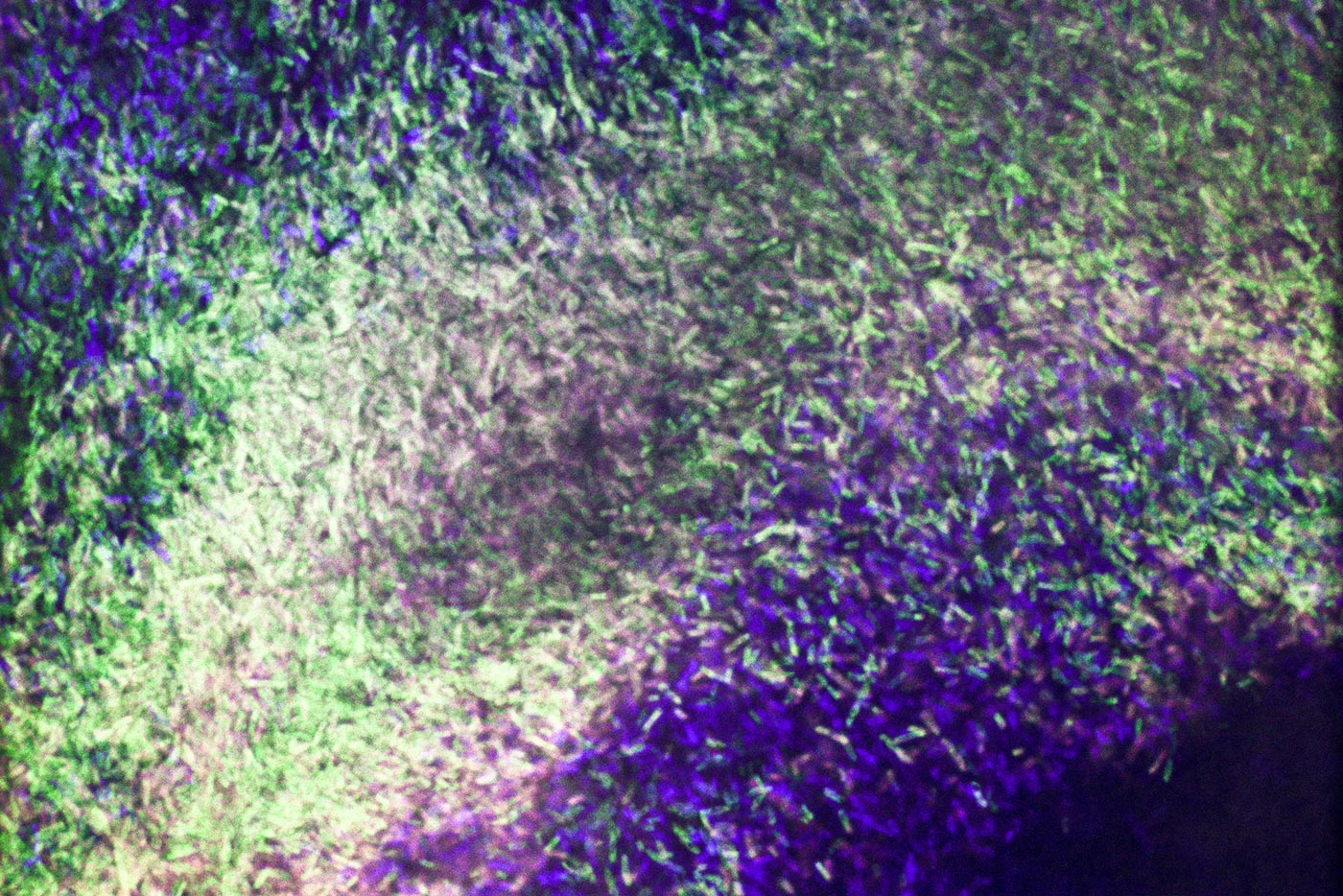 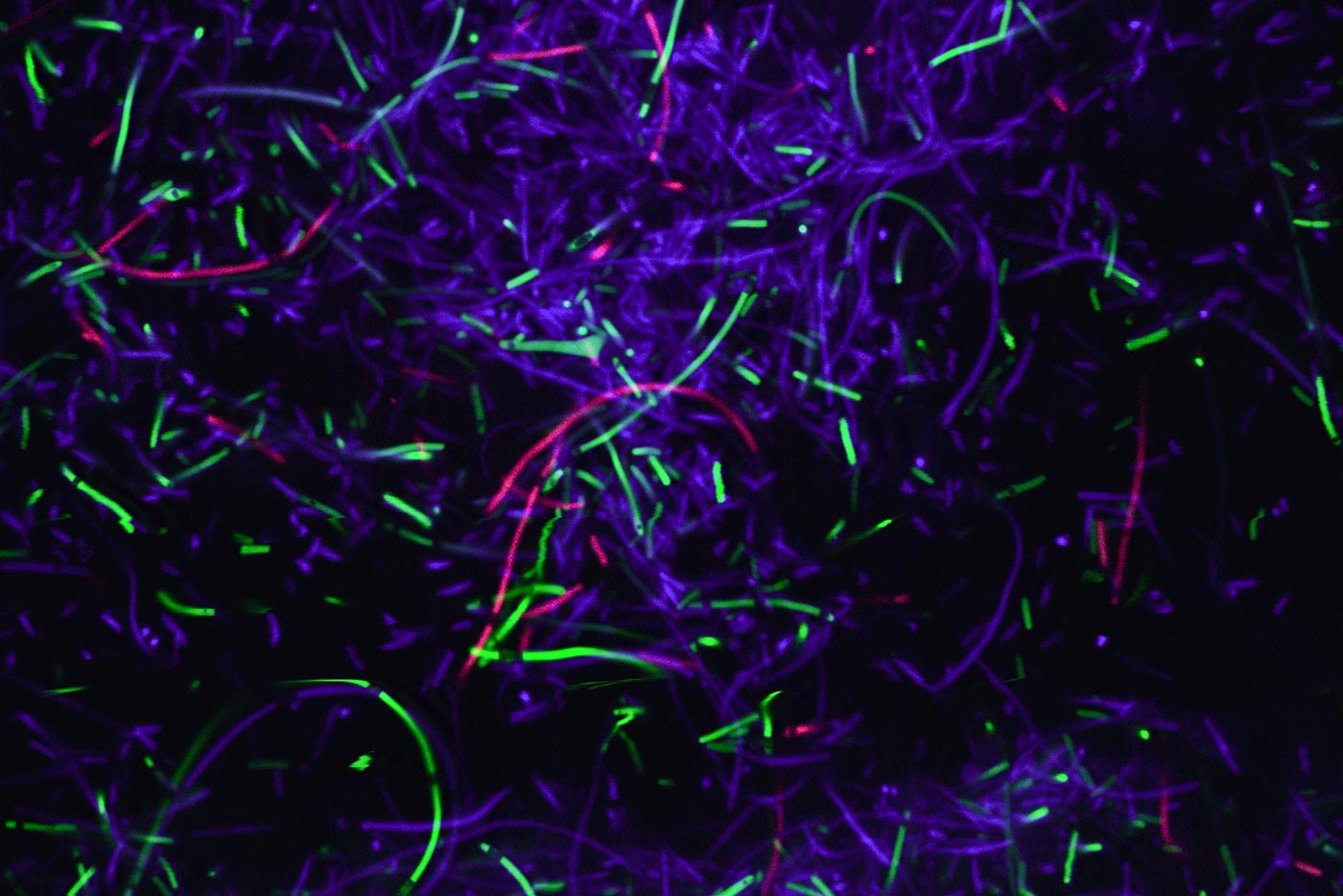 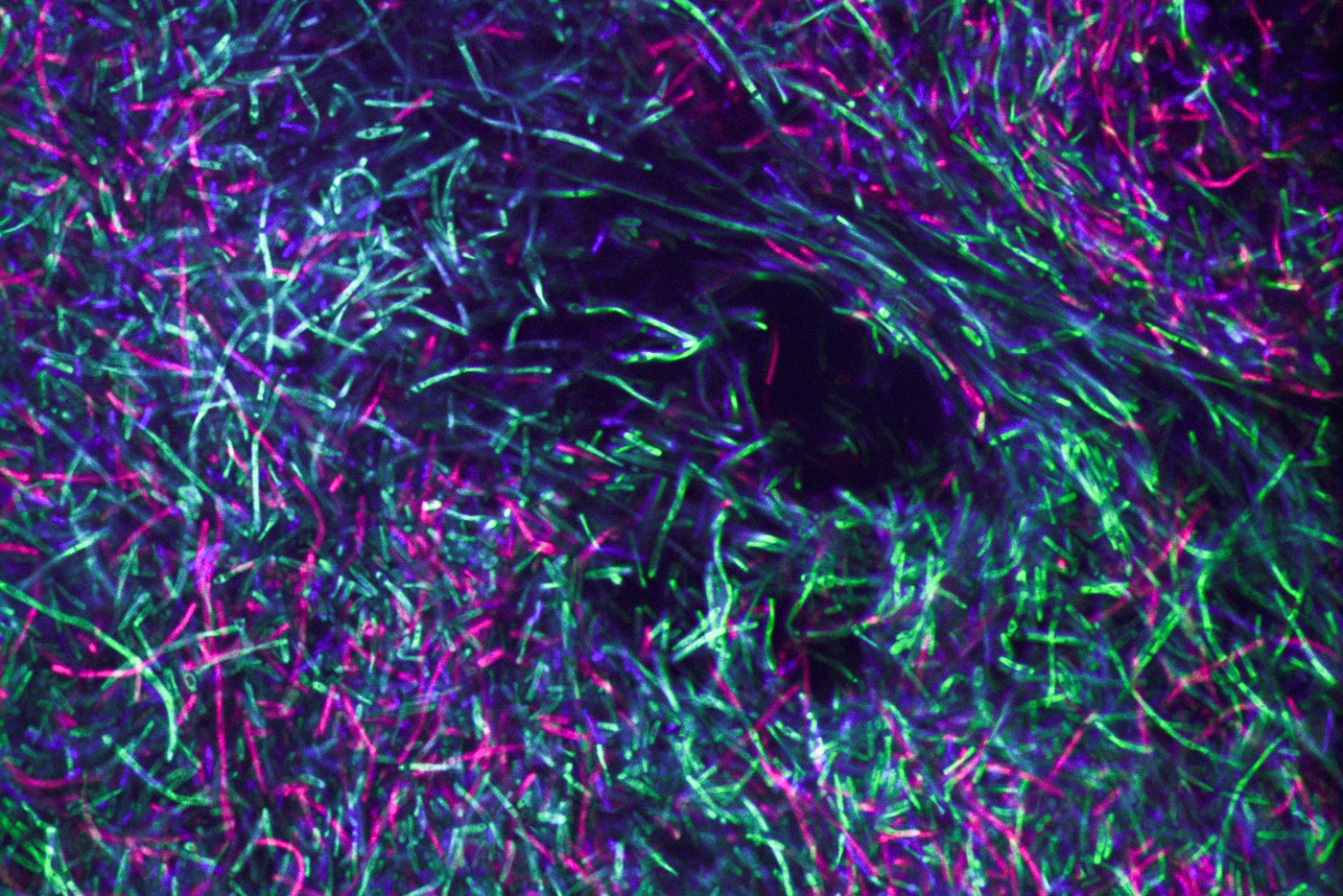 Genetic engineering is rapidly becoming the world’s most important engineering tool, and the use of E. coli bacteria was instrumental to the development of this discipline. These bacteria have a long history in laboratory culture and are one of the most widely studied model organisms. Unfortunately, they have a bad reputation with the general audience because of their association with illnesses. However, these tiny rod-shaped creatures that live in our intestines deserve closer scrutiny, not only for their scientific usefulness, but also for their fascinating lifestyle.

For this project, E. coli bacteria were genetically modified with bio-bricks to express three different kinds of fluorescent proteins; red, green, and cyan. The bacteria were captured through time-lapse laser-scanning confocal microscopy while undergoing growth and movement experiments. The resulting image sequences form the basis for the visual component of Gut Feeling. The microscopically enlarged images are further magnified by being projected in monumental dimensions. Processes that normally occur on the scale of 500 nanometers are suddenly visible a hundred thousand times their original size.

The visuals are accompanied by a real-time algorithmically composed composition based on the biosynthesis pathways described in the E. coli genome. The DNA structures for the creation of amino-acids and the resulting chemical reactions are transcoded into micro-sound elements which are clustered and spatialized on a multi-channel surround sound setup. The combined audiovisuals provide a complex multi-sensory journey into the life of the humble organisms with whom we share a symbiotic relationship, the E. coli bacteria.

Gut Feeling is presented in multiple different formats; a live audiovisual performance, a generative installation, and as a visual music film. This project was realized at the NanoPico Characterization Lab of the California NanoSystems Institute with the support from the University of California Institute for Research in the Arts and the Mondriaan Fund.

My eternal gratitude goes out to CHRISTINA AGAPAKIS without whom this project would never have succeeded.